Back to Article page

How To Toilet Train A Puppy

Toilet training should start as soon as your puppy gets home. Puppies urinate frequently and success in housetraining depends on anticipating their needs - they should be given the opportunity to relieve themselves at least every two hours. You can usually tell when a puppy 'wants to go' because he or she will look around anxiously, walk in circles and start sniffing in suitable corners looking for a place. That's your cue to whisk your pet outside.

Whatever the weather, puppies should be taken outside after they have woken up, or had something to drink or eat. Once out of the house, say a command such as 'Go Now' so they know it's ok to relieve themselves. Praise them when they go, but ignore them when they fail. And if you do find a puddle inside, don't tell your pup off unless you catch him or her in the act; otherwise your pet will have no idea why they're being punished. Never, ever 'rub their nose in it'.

Growing puppies are prone to infections & digestive upsets. Their natural ability to combat diseases is not fully developed and this period is called the ‘Immunity Gap’. Colostrum in PURINA® PRO PLAN PUPPY enhances the immune response and protects your puppy from various germs and infections. It comes in 3 variants - Small & Mini Puppy, Medium Puppy and Large Puppy. Choose the right food for your puppy today! 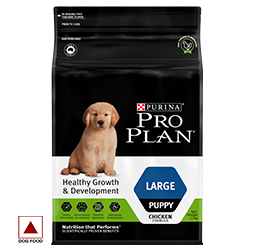 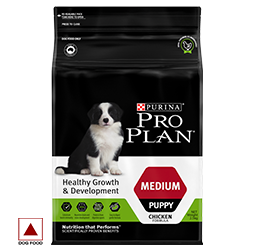 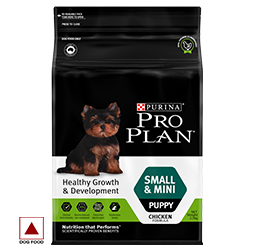 You can paper-train small breeds and young puppies on newspapers or ‘wee pads’. Praise them with lots of affection when the newspaper is used and ignore them when it's not. Be careful not to get in the habit of praising with food treats, because you run the risk of overfeeding. Puppies go to toilet around 12 times a day, and sometimes even more! Over time, move the newspapers towards the door and then out into the garden. Take a small piece of soiled paper outside, as the puppy recognises its own unique scent and will want to reinforce it.

Teaching your puppy to wait

An alternative method to paper training is crate (puppy playpen) training, where puppies are taught to wait in their own, special space before they're taken outside. The key is to give them an opportunity to relieve themselves at least every two hours, especially after eating, sleeping or playing.

If your puppy has an accident, don't be angry. Always clean the floor thoroughly to remove the odour from the spot; otherwise your puppy will continue to go to the toilet in the same place.

When it comes to adult dogs, start by keeping them confined to a designated space. Make a point of taking your dog outside on a regular basis, and when he or she 'goes', offer lots of hugs and praise. Same as for puppies, if there is an indoor accident, neutralise the area to prevent them going there again. For more on training an adult dog, view our training and obedience section.

Stick to a routine

Toilet training is an important part of general puppy training, and the way it is handled can have a real impact on your relationship with your puppy.

If you stick to a strict routine, your puppy or adult dog will quickly learn to be clean in the house, the first step to being house trained. But don't get complacent, or your dog's toilet training can lapse. Continue with the toilet training routine until you are sure that your puppy knows never to go indoors and can wait to go outside. Gradually phase out numerous outdoor trips, but if there are any accidents just start increasing the number of visits again.

How much should I feed my puppy?
Read more
What nutrients do puppies need for their growth?
Read more
Start The Journey