BODY LANGUAGE AND MOOD It's easy to interpret a dog's behavior the same way you might interpret a friend's. But it's important to remember that dogs and humans aren't the same, and it's worth getting to know the way dogs communicate.

You can tell a dog is in a friendly mood when his ears are relaxed, his tail is flat, with plenty of wagging, and he makes gentle eye contact.

A fearful dog is usually crouching with his tail between his legs. He will also avoid looking you in the eye. He may roll over on his back or urinate while lying down. Be careful around a fearful dog, as he may bite if he feels threatened.

If a dog's ears and tail are standing up and he is staring intently, he is showing assertion. He may put his paws on another dog's back or be pushy with the dog or with the owner.

If he stares and holds his tail motionless, growls, and holds his ears forward, he may be a threat. Watch out for this behavior in a dog.

When a dog pushes his chest to the ground and holds his rear and tail in the air, he is trying to initiate play.

This basic list of moods is a starting point for reading your dog. Hopefully some mindful observation of your dog accompanied with these tips will help you get a read on his body language 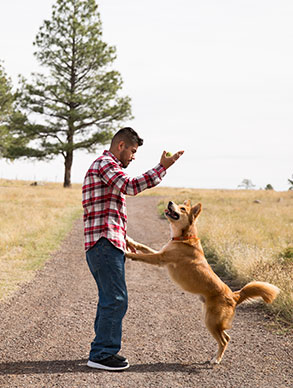 At PURINA, we believe that dogs are capable of 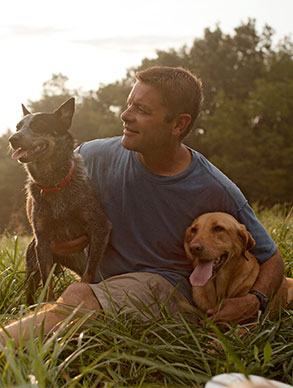 From providing a complete and balanced diet to